Climate Change is Going to Make Septic Systems a Problem

Climate Change is Going to Make Septic Systems a Problem

CNN)A major UN report released this week shows the sea level is rising around the globe, which means people who live in coastal cities face real risks from losing their property, and in some cases their live, to the rising ocean and the intense storms these warmer waters bring.

And it will make it harder for more than 60 million people in the United States to flush their toilets.
About 1 in 5 US households rely on septic systems, according to the US Environmental Protection Agency. It’s a type of sanitary system that has worked since ancient Egyptian times, but the climate crisis and septic systems don’t mix, studies show.
These systems will be incredibly vulnerable to sea level rise and heavy rains. The climate crisis has brought both. In areas with drought, it may also be difficult to get the volume of water needed to keep the tanks functioning, studies show.
Many systems are clustered in coastal areas that are already expecting sea level rise, including around Boston and New York. Nearly half of New England homes depend on them.
Florida also has a disproportionate share. It’s home to 2.6 million systems, or about 12% of all theseptic systems in the country, the Florida Department of Health estimates. Miami-Dade Countyalone is home to more than 105,000 septic systems.
Sea level rise is not a registered voter. It doesn’t have a party. It’s something that is going to affect everyone,” said Rebeca Sosa, vice chairwoman of the Miami-Dade County Commission, who spearheaded a study on septic tank vulnerability in the county.
She knows it’s not a glamorous political issue, but with a lot of her residents living on Social Security checks, they’re not going to have the extra funds to deal with the issue.
“Our job right now is to make sure that we make the state and the federal government understand … that we need help, so we can help those who are not going to be able to pay to have sewer lines.”
A county report predicts that within the next 25 years, 64% of the tanks could break and need repairs every year. The report found there are likely 1,000 properties already failing under current conditions.
That’s bad news for residents, but news that will keep some workers busy.

‘Contamination is a real possibility’

When Jason and Brittnie Nesenman were high school sweethearts, never in a million years did they picture themselves standing where they are today: Together, hovering over someone else’s poop. 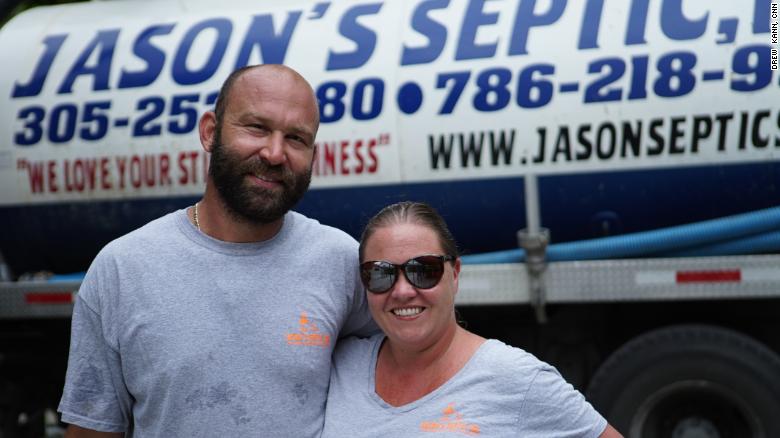 Jason and Brittnie Nesenman have a lot of extra work fixing septic systems that are vulnerable to the climate crisis.
Jason gets a better angle on a bright blue corrugated hose as Brittnie oversees the operation. The hose runs from their tanker truck, painted with their company’s colorful slogan, “We love your stinkin’ business,” into a septic system. Workers concentrate as they move boards and branches. Together, they clean the tank dug into the side yard of a million-dollar home.
Brittnie shakes her head and laughs, as she describes the fortuitousness of Jason’s decision to start Jason’s Septic Inc. 15 years ago. It certainly didn’t feel that way at the time.
“I was pregnant when Jason came home and told me he quit his job working for a local plumber. I actually gasped,” Brittnie said. “I was a massage therapist. We had no money.”
It may not have been the most romantic gesture when Jason swapped his beloved classic car for a septic draining tanker truck, but it gives the couple a sunny future at a time when the climate crisis darkens Miami-Dade County’s doorstep.
The systems need a certain level of unsaturated dirt to work, but the dirt is disappearing as the sea level is rising.
“With the sea level going up, the water table has risen up,” said Jason.
With a sewer system, he explains, water is whisked away to a water treatment plant.
With septic, the dirt around the tank filters out the contaminants. You flush your toilet, the waste fills a tank on property. Bacteria breaks it down. The heavier material falls to the bottom of the tank. Eventually, the effluent goes into underground pipes and gets released into the soil. 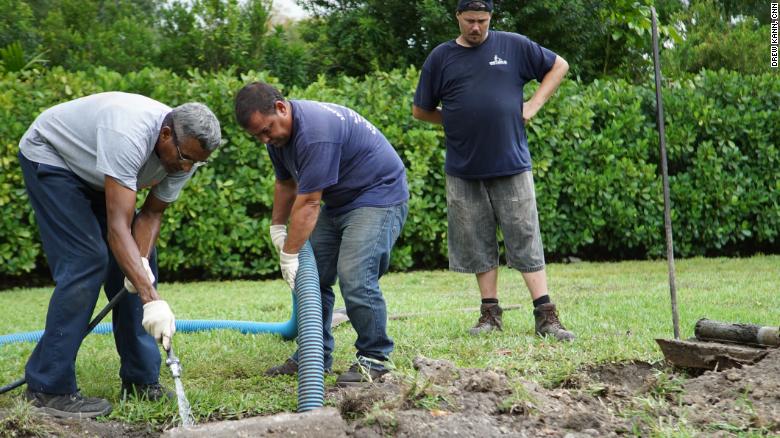 Septic tank repair workers flush out a septic system in Miami.
The higher water table is eating away at all that dirt.
“Everything floats downhill, if there’s no more downhill and you’re in the water, it’s just not going to work,” Jason explains. “So the systems, the older systems aren’t lasting as long.”
No soil means no filter, and no filter means contamination, Jennifer Cooper concluded in her 2016 study titled “Hell and High Water: Diminished Septic System Performance in Coastal Regions Due to Climate Change.” 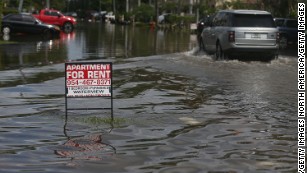 Republican governor appoints Florida’s first chief science officer
“The combination of sea level rise and the wetter conditions and warmer temperature is going to be a problem for these systems, for sure,” Cooper said.
Rachel Silverstein, the executive director for Miami Waterkeeper, a nonprofit that fights to protect South Florida waters, eyes the area’s septic systems with real concern.
“Contamination is a real possibility,” said Silverstein. Broken septic systems mean when it floods people will be wading through waste that can make them sick.
If untreated sewage gets into area waters, it can create algae blooms and other ecological problems.

‘This is not a third-world country, this is Miami’ 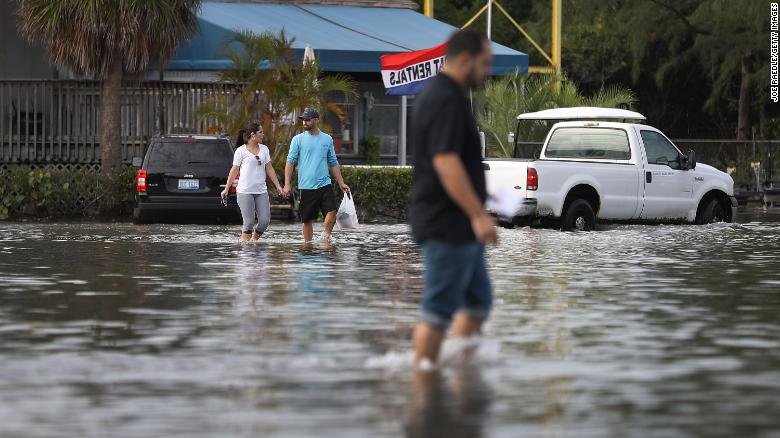 Even on sunny days, Miami is seeing flooding caused by the lunar orbit, which causes seasonal high tides, and what some scientists believe is rising sea levels due to climate change.
As he drives a golf cart from his tiny house real estate office to his lofted modern home, Marcelo Fernandes points to parts of his neighborhood road that flood.
Fernandes, a developer who sells homes in the area, says he has seen more floods due to high tides, even on days with clear skies.
His neighborhood is on septic. He’s worried about the sewage that will be in those flood waters when these septic systems break. Studies show this is a real threat to human health and to drinking water. 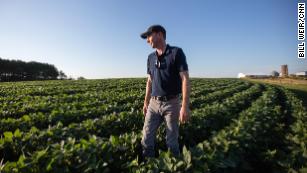 Scientists say farmers could grow their way out of the climate crisis
“When we are talking about flooding, we are talking about walking around in sewage, it’s bacterial infested sewage,” Fernandes says with disbelief. “This is not a third-world country, this is Miami. This shouldn’t happen.”
Doug Yoder, the deputy director of the Miami-Dade Water and Sewer Department, says the county has been strategizing and working on the problem of sea level rise for about 30 years. 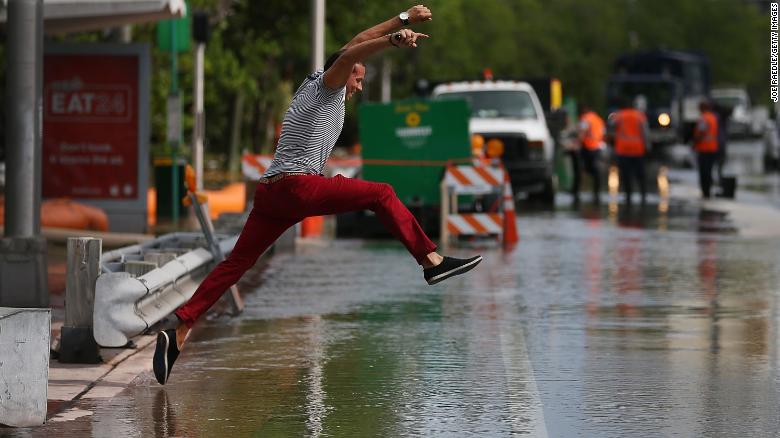 With flooding due to sea level rise, the Miami area will have to improve its infrastructure to cope with the high tides.
“This water management system is probably one of the most complex anywhere in the world,” explained Yoder. “We are in a place where the ocean is directly connected to our shallow groundwater system. As sea level rises, which it is clearly doing, it is going to affect our ability to both protect our drinking water supply and protect the built environment.”
The county report estimates it would take more than $3.3 billion to build the infrastructure to connect residential and businesses to the system and to support the additional service that will be needed from pumping systems and move properties to traditional sewer. 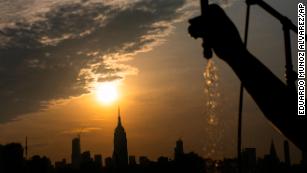 Record high temperatures far exceed record lows — a trend of the climate crisis
“It’s going to require even more than that, because you would also have to tear up the streets, and increase the capacity in our treatment system,” said Yoder.
For residents, replacing a septic system with sewer could cost between $15,000 to $50,000 out of pocket. It’s not an easy bill to pay for many residents and not an easy sell for politicians. Miami Waterkeeper’s Silversteinworries the area isn’t ready to adapt.
“All of the rules and regulations aren’t there quite yet,” Silverstein said. “There’s still a lot of development and people are really just hoping for the best.” 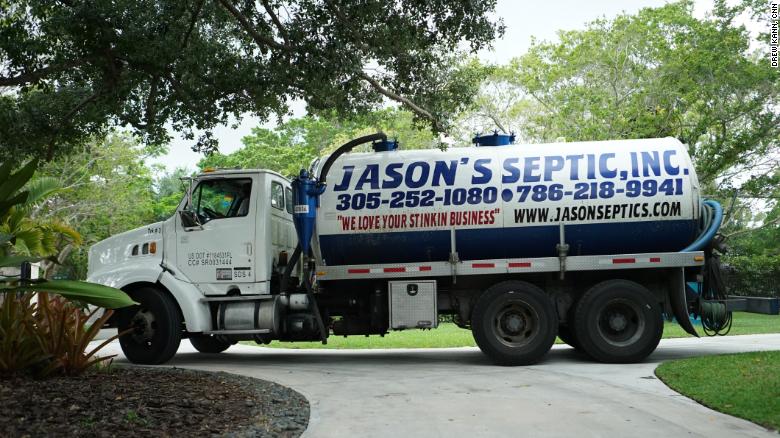 Septic repair tanker trucks could be more common in coastal cities, due to the climate crisis.

There are counties in the area that are already working to eliminate all their septic systems in the next decade. Martin County, for example, has about 10,000 systems left to replace. The county is sharing the cost with residents. 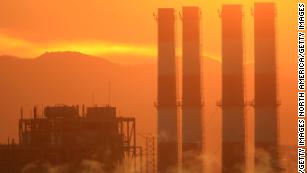 Former State Dept. analyst says White House is ‘undercutting evidence’ by blocking climate change warning
New developments there have to be connected to sewer lines. That’s not the case in Miami-Dade County, where there are still new developments being built on septic. Miami-Dade County Commissioner Sosa is introducing legislation to change that.
Sosa has serious concerns about how much this septic system problem will cost her constituents. She has worked with the governor to get funding. She also hopes to get more information to the public about the issue.
“How do we fix this? It’s not easy,” said Sosa.
Even if people have the money, if they live miles from closest sewer connection it may not even be possible to connect, Sosa said, so the area will have to come up with alternatives, like elevating some systems.
Get CNN Health’s weekly newsletter

Sign up here to get The Results Are In with Dr. Sanjay Gupta every Tuesday from the CNN Health team.

“We have to act and we have to act with speed,” Sosa said. “But if we don’t get funding assistance it’s going to be impossible to do.”
Politically, Sosa said it may be hard to find the money for this, but, she said the county’s future depends on it.
“We don’t need people saying ‘We don’t go to Miami-Dade County, because look at the problems they have with the sewer system. Look at the contamination we have with the drinking water,’ ” Sosa said. “It’s of an incredible importance. The drinking water and the safety and health of the people, that has no price.”
By mario| 2019-10-01T18:36:31+00:00 October 1st, 2019|Blog|0 Comments

About the Author: mario